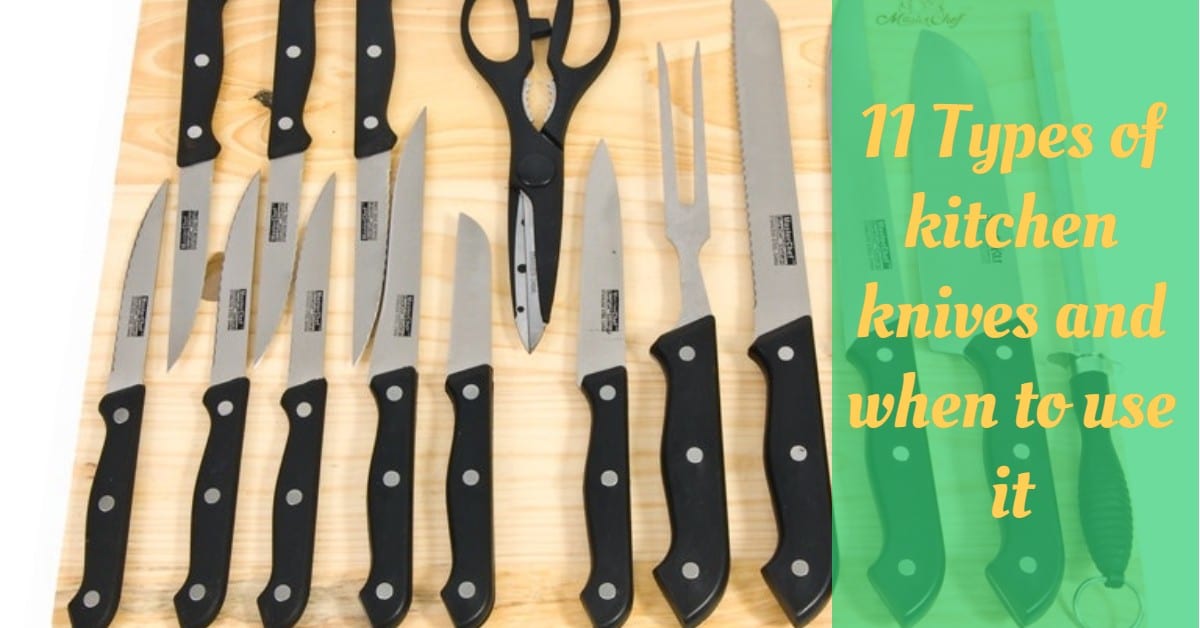 Real cooking pros know how important are kitchen knives in the process of meal preparation. There are more than 10 types of them and each one is serving a different purpose. In case you know for what each knife is for and how to use it right, your cooking process will become many times easier and effective. 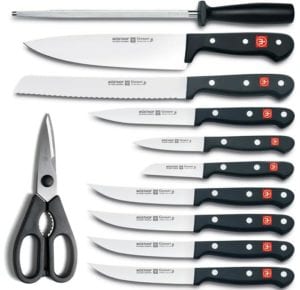 But don’t rush to buy dozens of knives as well. True chefs usually use not more than 10 types of knives in their cooking process, in order to avoid the mess with too many tools. Besides, not a secret that using them is not easy. The level of difficulty depends on how many types you want to own and what is your budget.

If you are someone who cooks quite often with multiple ingredients, then the acquisition of a knife set with various types of them will be definitely beneficial for you – it is easier to cut any food with a specialized knife. But if you appear to be in the kitchen quite rare, then it’s highly unlikely that you need to buy all kinds of knives existing.

Check these reviews to choose the best knife:

You can largely benefit from buying the basic ones but of a good brand and quality. It will make the cooking process even faster and easier that way. An interesting fact that even if you belong to that kind of person who doesn’t cook at all, you will still probably use at least one kitchen knife.

And even if you’re not planning to acquire more than 2-3 types of knives then it is still useful to know at least a little bit about all kinds of them, just in case you’ll suddenly have to use new types of knives.

You may also like: Ceramic knives vs Steel knives 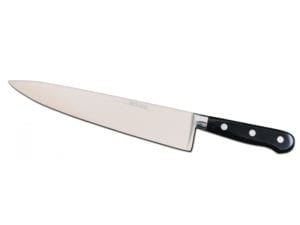 This is the basic of all the kitchen knives. A feature that you can notice immediately and which distinct this knife from other ones is its broad blade. It tapers upward to a point, allowing the knife to rock back and forward for fast mincing. It’s about 6 to 12 inches long.

Of course, the length of the blade may vary and the longer it is, the easier the slicing is. However, you should take into consideration the fact that if your hands are short, the shorted blade will be easier for you to use and control.

Most chef’s knives are unserrated, but some brands have also started to make serrated ones. Another feature of this knife is that it can be used in the kitchen for almost any purpose, so make sure you got one in yours.

For example, you can slice bread with this knife, or slice the meat, veggies and so on. It’s a kind of a multi-tasking knife. Doesn’t matter if it’s longer or shorter, you should always have it in your cooking set. 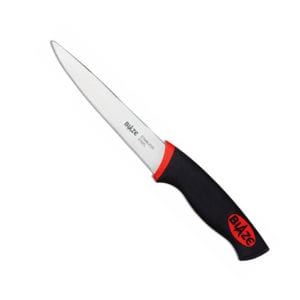 This knife is definitely smaller than the previous one, it also known to be a smaller version of the Chief’s Knife. It is usually between 4 and 7 inches in length. Utility knives often come with a scalloped edge for flexibility in cutting.

And sometimes it can happen that people don’t have a chief’s knife in their kitchen, but they still have the utility one. It depends on cooking style and preferations. If a person owns a knife only of this type it can be probably stated that he/she is not really into cooking and complicated recipes.

In general, the utility knife is perfect for peeling softer vegetables, but it can peel hard as well. It is also good for cutting tomatoes or hard-boiled eggs. It is also very useful when you want to prepare lettuces, cabbage, and sandwich meat.

This is also a type of knife that can be often found in people’s kitchens. Here it is interesting to notice that this knife has a Japanese name. Actually, the Santoku knife is a Japanese version of the Western-style chef’s knife. This name means “three virtues”, which are slicing, dicing, and mincing. The same story has the Japanese cutting boards which, like knives, are of high quality and easy to use. 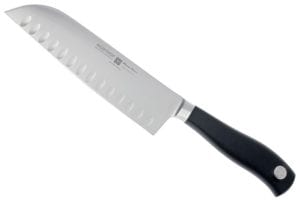 However, many people don’t see any similarities it to the Chief’s Knife. Well, from one point, the Santoku knife actually does have a lot of distinctive features because it is shorter and lighter. Its blade is flat, so it doesn’t rock on the cutting board.

That’s why when you want to mince herbs, the Santoku will probably make a lesser choice. On the contrary, if you want to cut your veggies in more accurate and thinner pieces, this variant is optional.

Sometimes these kinds of knives are made with the hollow edge, which allows them to cut through meat and other sticky materials faster, with more precision, and minimal tearing.

In general, the Santuku’s knife is capable of doing the same things the Chief’s Knife can do, so it’s also comprehensible for every day and every cooking session use. In fact, it’s used in place of the chef’s knife by some cooks, especially those with tender hands and prefer a smaller, lighter blade.

You may not consider that as a part of a knife set in general, but everyone for sure has a pair in their kitchen. So yes, Kitchen Shears is also a part of a cutting set. And, it is needed to say, a very useful one.

There is nothing too special about it, just a pair of scissors. They do have some distinctive features, however. The main thing that distinguishes them from regular ones is their extreme sharpness, so be careful when you use them.

Moreover, if we got used to utilizing regular scissors only for cutting the paper or plastic, then the kitchen shears are suitable for cutting the food as well. Yes, you are able to cut green onion or other herbs. You can also cut such species as cinnamon or even sausages. 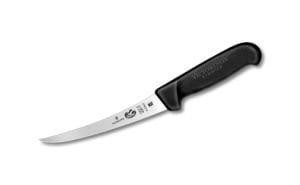 Moving on, we have not so common type of a knife, which, nevertheless, doesn’t make it less interesting. As you have probably already guessed from the name of this type, this knife is meant to separate bones from the meat. You can also make filet fish, and cut up meat. Use a sharpening stone to make sure that your knife will easily chop meat.

Another fact about the boning knife is that it is actually loved by vegetarians. And really, this item can be chosen as a paring knife for peeling and trimming veggies. These knives are usually about 3 to 8 inches in length. The widths of blades can vary, but not significantly.

The blades can be divided into the following categories: flexi, semi-flexi, or stiff. Those with stiff blades being the most popular among home cooks due to the enhanced precision in the cut.

The first thing you can notice about this knife is that it has quite a different shape. They are useful for cutting bread, cakes, and other things baked and even meat.

The bread knife is usually long and large in size since originally it was meant to cut the large chunks of bread. But nowadays you can easily find the compact versions of it on the market.

Usually, they are 7 to 10 inches long. The blade of the bread knife is usually narrow and always serrated, with big “teeth” coming along with it. Use a bread cutting board to make perfect slicer of bread. Besides, you can store bread in it. 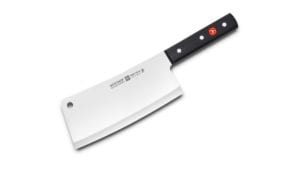 This is probably the type of knife that you have seen so many times on videos or photos, but in real life, they are quite rare. Well, honestly, they are not the first necessary object even in the set of knives. Usually it’s the largest knife in the kitchen, if you check.

Cleaver, first of all, is made for dealing with the meat. They usually come with a very strong blade, which allows it to cut through bones and meat in a chopping motion. With this knife, you can chop the meat in a hard way. You can also use cutting boards for raw meat to cut the meat more easily.

And actually, this knife is suitable not for the meat only. Because of its wide and heavy blades, it is perfect for chopping any hard materials. It is also great for raw or cooked meat, poultry and fish, and also crushing garlic. 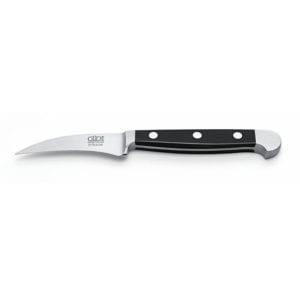 The simple name of this knife is “parer”. The length of its blade is usually 3 – 4 inches. Moreover, another distinctive feature of it is that it has a very pointy tip. You can use it for cutting and peeling fruits, veggies, and trimming excess fat. Thanks to this knife, everything will be done with precision and ease.

The variations this knife may differ from each other as well, but most common ones include the spear point, sheep’s foot, and bird’s beak, named after the shape of the point. Just watch out that you don’t lose it somewhere.

Steak is one of the statement dishes in almost 60% of the world’s cuisine, so it’s not surprising that there is a separate knife for it in the set. This is usually a tool of middle or small size, with a metal blade with riffled edges.

Steak knives are used for not only cutting meat and sometimes fish, but also for salads, other (mainly cooked) foods, and spreading butter. By the way, there are different variations of it, so the blade can either have or not have special edges. It depends on the brand of a knife.

But the serrated steak knives are generally more popular. It’s because they can stay sharp for a longer time without honing or sharpening, so keep that in mind while choosing a knife set for your kitchen.

Interesting name, and here we have another Japanese knife. It even looks similar to the Santoku. However, it serves different purposes: the Nakiri Bocho is mainly used for cutting the vegetables. So for all the vegans, this is your choice. You can also use vegetable dicer for quick cooking.

The knife has a thin blade and squared-off tips. It is straight and that’s why it’s able to cut through prolonged-sized vegetables, such as carrots, eggplants, zucchini and so on.

It will make the tiniest and thinnest slices possible. But generally, it’s good for slicing any vegetables, for example, tomatoes.

How many of you are chicken lovers out there? For sure, there is not just a single person who eats chicken or salmon fillet at least ones a week. There is a separate knife for fillet, actually.

It looks really similar to the boning knife, but there are some subtle differences between the two. Keep in mind that the boning knife is meant to remove the meat from the bones and that’s why it has a thicker blade.

The fillet knife, at the same time, has a thinner, longer, and more flexible blade, since it is made to cut thin fish slices. But here we have a case when the differences between these two kinds are so insignificant, that they can easily substitute each other in various situations.

Knifemakers sometimes merge the two, hence the emergence of the boning fillet knife. You will only notice the difference immediately if you are a and sashimi pro or a chicken boning pro. For home cooking, this knife is not the first item to have, even though it is nice.

You can also check: 5 World’s Most Expensive Knives